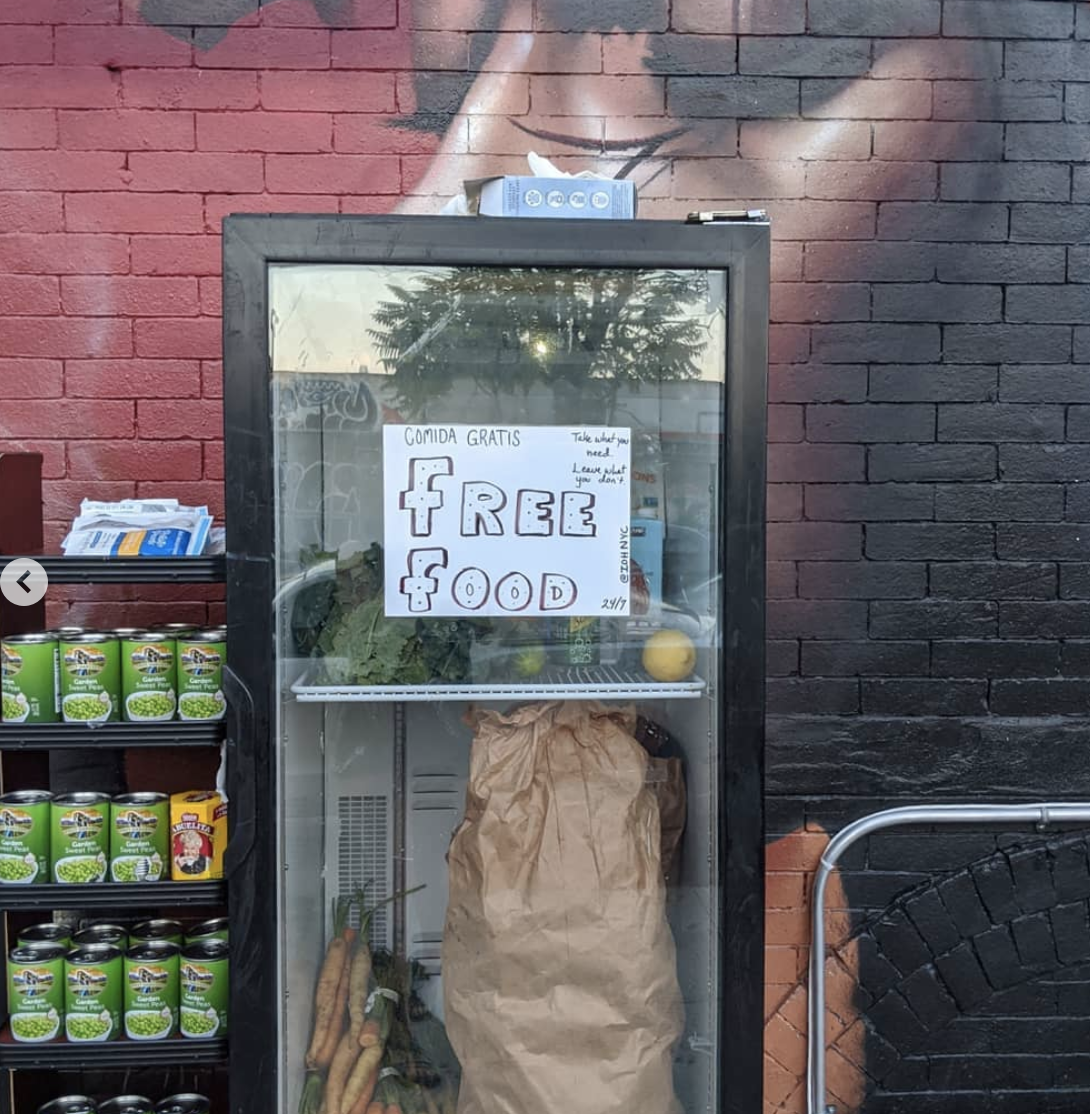 The Instagram algorithm has a way of showing what you need when you least expect it. And recently, the explore page serendipitously introduced me to The Bushwick Community Fridge.

The page presented a handful of posts capturing a modestly structured fridge backdropped by a mural constructed by the artist Zim. Similar to the altruistic value of public bookcases, the food repository, created in partnership with the Anarchist network, Our Hearts is a New York City, has been seeking “to prioritize ending food waste” and “distributing excess food” to East Bushwick residents in need of access to food.

A cursory search on the web presents a panoply of similar initiatives that have been instituted around New York since February, alongside a list of journalistic pieces spotlighting the community action globally. In our food-rich country, healthy consumables shouldn’t be inaccessible, yet, according to The Alliance To End Hunger, “13.4% of Americans experience food insecurity - the inability to obtain adequate nutritious food.”

Movements made to protect the livelihood of their community have sprawled with vigor as a result of COVID-19. Bitter sweet, the pandemic has removed the “proud” shroud of prosperity casted over our country, revealing that we’ve been living in a failed state.

As well, the virus has brought to the foreground greater scrutiny on addressing our nation’s issues with race. What has been erroneously delineated as purely a class issue, the race-based effects have increasingly captivated the dialogue. The reality has been that BIPOCs have been dealt deadlier blows to their health than their counterparts. And as the media exhibits Black bodies riddled with bullets, elsewhere their stomachs are stricken with hunger.

The well-meaning neighbors who have installed these “friendly fridges” have been offering support where government aid has fallen short. These nutriment reservoirs -- while offering nutritious sustenance to food insecure residents -- have been concurrently addressing structural racism that has compromised the food system. As written by Dayna Evans, these fridges inherently have been acting as a form of protest.

To understand a community fridge’s radical essence, one must grasp how food has been politicized in the Black and brown communities. One of the roots of this generational trauma may be traced back to redlining.

Defined in an episode of NPR’s Fresh Air, redinling was a process undergone by the federal government in the 1930s in which neighborhoods were characterized for real estate investment with a certain risk or "desirability." Areas redlined vastly contained Black folks or immigrants, leading to inaccessible loans, greater segregation and generational financial inequities.

Arguably antiquated, the practice created lasting damage that has been inherently connected to Black and brown communities’ food systems. In turn this affected the ability for community grocers, restaurants, and other businesses to obtain loans and issuance. Fundamentally, without access to nutritious food from grocery stores, the areas became stricken with food deserts and swamps.

Largely these areas are Black and brown, Harlem, the South Bronx, and Brooklyn (once redlined) have fallen victim to being neighborhoods plagued by food deserts and swamps. Compared to more affluent areas, alongside sparse access to groceries and healthy food options, individuals are left to likely consume cheaper, unhealthy options. And in New York where 31.8% of Black and 41.3% of Hispanics residents are food insecure (opposed to 16.5% of White residents), the dietary habits of these communities have left them at a higher risk for obesity, diabetes, cardiovascular diseases and cancers, nationally.

According to the CDC, individuals at any age with the aforementioned underlying medical conditions have been deemed to be at higher risk for severe illness from COVID-19. Not exclusive to New York, but nationwide, there has been a precipitable effect in how these racial inequities in services and food systems have disportionately led to higher rates of illness and corona-related deaths with POCs. Compacting the detrimental weight of the virus, bodegas that act as food grasslands, serving fresh produce and healthy food options to those areas listed as food deserts, have lost business. Youssef Mubarez — a spokesperson for the Yemeni American Merchants Association, “predicts that several will close permanently because of the financial hit bodegas.” Thus another blow has been dealt to proper food resources.

Considering all the intricacies, community fridges installed in Harlem, the South Bronx, and Central Brooklyn have been fighting racial inequities erroneously dropped upon POCs. They have become monuments for the unrest held by POCs communities, detailing that the government must be held accountable. And until they answer, individuals have picked up the slack where elected officials have failed.

Now community fridges are not a silver bullet to the complex reality we have dwelled in, but they have been addressing short term issues with hunger and food insecurity. However, there is still much work to be done. Which is why, readers, I implore you to get active: start your own community fridge, donate food and money to those operating these storage vessels in your area and learn more about these initiatives via freedge.org.

Brontë Velez -- a Black-latinx multimedia artist, educator and designer -- has denoted food as being of both great nourishment and harm. But how can we further dismantle the harm?